Age of Conan is one of the first major MMOs that managed to shift from a subscription based model to free to play, and this was a great move for the game in my opinion. From a buggy mess, the Age of Conan game became one of the most interesting online gaming experiences you can find right now. Sure, it’s still not flawless, but it’s a great game.

What makes the difference in Age of Conan is the fact that you get to explore the massive and lore rich Conan-themed world, filled with barbarians and ruthless people. The game does place a lot of emphasis on violence unlike any other title, so this is a mature, brutal MMO experience.

Right from the start, you can see that the combat in Age of Conan is very different when compared to what you encounter in other MMOs. Instead of automatic attacks, here you get to do all attacks in a manual manner, which does make you feel like a barbarian. I liked the fact that you can swing the weapon in each direction you want, and you can engage in slashes, upwards attacks and so on.

But this would not be enough if the AI was bad. Thankfully, Age of Conan brings a great AI that successfully manages to impress through its variety of attacks.

However, this is still an MMO so in order to get the best loot you do need to grind continually. Thankfully, I found the loot to be very good, with various sets that you can acquire and there are numerous ways to customize your character’s defense and looks. These armor sets just make your character look like a barbarian, and in the end this is all that matters.

Age of Conan provides a lot of content, with numerous large cities being placed on the map and various locations integrated between them. You can choose to play the game on your own just fine, but you can also join up others and engage in dungeon raids and so on.

The best thing about the content in Age of Conan is that it brings a lot of variety so you will never feel like you do the same thing over and over again. Sure, you do grind for better loot, but at least the missions are varied enough to enjoy them at all times.

Usually, you will receive quests in hubs, and these provide an interesting insight into the world of Conan. 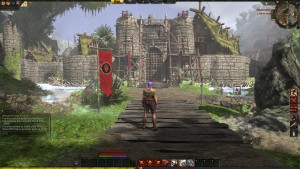 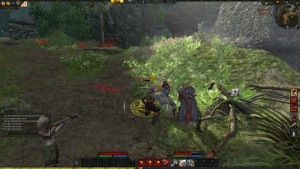 Although many gamers might not notice, Age of Conan features a very impressive storyline that manages to add that variety you need. It’s great to see that you do have a premise in the game, and you don’t level up for nothing, so to speak. Leveling is normal, and when you acquire new levels as well as abilities you do feel like you progress, something that I kind of miss in the modern MMOs released recently.

What I like in this game is the fact that there is a constant need of strategizing your attacks in order to get the best results. There’s always the need to surpass your abilities and create strategies when attacking your opponents. Speaking of opponents, I found it very peculiar that they actually use formations instead of blindly attacking you one by one. Their formations make your experience much more intense, and escaping each fight alive when you engage in battle with 5 or even more enemies feels very rewarding.

Despite the fact that Age of Conan plays really well as a singleplayer experience, the game manages to implement a wide range of social functions. The chat comes in various categories so you can easily access any player at all times. Alongside that, you have your own friends list that you can access at all times and, of course, you can also create your own guild or join others. What I enjoyed here is that guilds can actually create their own cities and engage in PVP with other guilds, in a one of a kind siege warfare that you just can’t see in other games. Moreover, you have a good group finder which makes it relatively easy to find your group during a dungeon raid for example.

In addition, the level cap in Age of Conan is continually raised, so you never lack incentives to play. Even if you have reached the level cap, there are tons of things to do, such as the raids we presented above or you can attack other enemies on your own in PVP duels. Sure, there’s also the opportunity to start off with a new class and check out new ways to battle your enemies.

This is a very innovative game that manages to bring a ton of new and interesting ideas to the table, ideas that are presented in an appealing manner. From the great skill tree to the leveling system that is very easy to understand or the numerous quests, the game manages to combine modern and classic MMO ideas into a one of a kind package.

Age of Conan might not be the best looking MMO on the market right now, but its continual updates have added a lot of visual appeal to the game. The game world looks amazing, with various types of environments that do manage to bring you a Conan-esque feel. Cities are very menacing and greatly designed and the characters in the game also look stunning as well. There were are few problems with the animations almost each time we played, but most of the time you will hardly notice these as you play.

When it comes to the soundtrack, we liked the action packed tunes that are integrated in the game, since we feel that they offer the much needed variety you want from such a title.

To sum up, Age of Conan is one of the best MMOs that you can play right now. It’s a very good game that just has everything you might want, from great level design to a good story, immersive quests, visceral combat and all the customization options that you might need from such a game. Sure, it has its flaws like pretty much any game nowadays, but if you have even the slightest interest in an MMO, then this is one of the best choices you can make in my opinion.