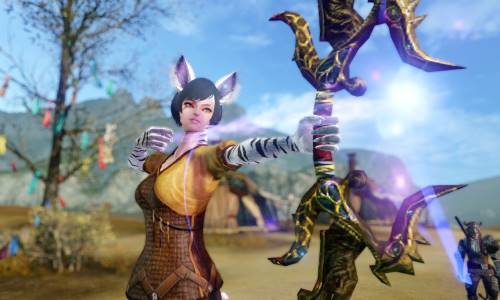 Archeage is a MMORPG (massive multiplayer online role playing game). Its creation hails from South Korea from a man by the name Jake Song and was produced by Trion Worlds and XLGames. But unlike many games of the genre that can feel like a grind-fest, this game is also not so linear, allowing you the freedom to do pretty much whatever the hell you want after a while. After leveling up your character you are free to roam and take on quests as you see fit. It also allows you to take on a few quests simultaneously. At first, the initial quests are rather important. They serve as a really good tutorial, especially for a person who may be new to the type of gameplay. Also, a winning feature of the game is that it is currently free to play. It cost a lot in its alpha stage, but now you can enjoy the game for free.

You can play as four different races. The Nuians are these warrior badasses, described as “conquerors of the continent”. They certainly look the part, donning some serious steely knight attire. The Harani are another human-esque race said to be “survivors”. They are oddly childlike looking. Then you have your elves because what’s a medieval game or, any RPG really, without elves as a playable class? And lastly you have the Firran, which really just look like the manifestation of every furry fantasy ever, but they are rather endearing. Each race has an interesting culture, lore, and even spiritual aspect to them. Firran spirituality for example, is intricately wrapped up in nature and the elements; they devote great respect to those things.

Skill-sets are unlocked as you progress through the game, but you start out with one in the beginning. There are ten skill-sets to choose from: sorcery, archery, shadowplay, witchcraft, battlerage, vitalism (healing), occultism, defense, auramancy (teleportation and magic), and songcraft (apparently magical musical powers. That’s new.) Different combinations of skill-sets can provide you differing advantages. Archery, for example, allows you to deal a good bit of damage to your target from far away before they can approach you in battle. 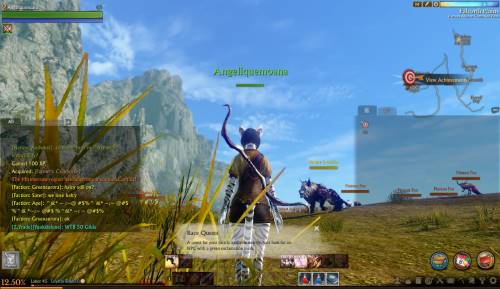 It is an open-world game but depending on the race you select you will start off in a particular place and map. Firrans, the class I played, start out in Haranya. I found however that if you gain precisely 3000 “infamy” points you will be banished to Pirate Island to become a pirate, living out your life as an outlaw and you can sail the sea.

Each region is pretty expansive however in its own right, but not so spread out that moving from quest to quest feels like watching your character run for eons. You also can gain interesting ways to travel once you have enough labor points and tools to craft things.

Toward the beginning of the game you can receive and equip a glider, letting you fly from high-up places like cliffs. The quests that guide you throughout the land are straight-forward, often activated by talking to so-and-so with an exclamation mark or question mark over their head. This will also progress you through a little bit of a narrative, which starts you out with a melodramatic subplot fairly early in the game to keep you motivated if lore and such intrigues you as it does me.

Here’s a real nice feature. Some call it a feature for lazy people but I think it is very anti-grind. RPGs are often known for mind-numbing grinding where you have to do monotonous tasks over and over again just to level up. I’m looking at you Final Fantasy 13. But Archeage has an “early bird” feature where, if you don’t want to complete a number based task (such as kill 5 giant spiders), you can complete the task halfway and then report back to the person who gave the task to you. You won’t reap as much reward, but it can progress things along for you if you don’t feel like grinding. 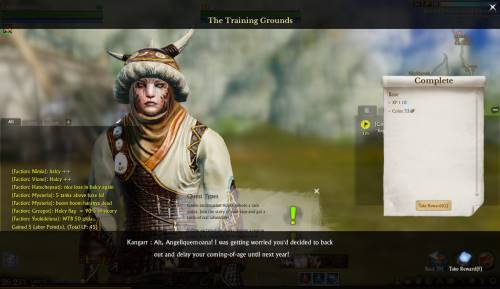 And, of course, you are free to join up with other players to go on quests. You can join guilds. Or you can jog along helping NPCs with various struggles. There often seems to be some sort of war to put efforts towards. Or sometimes there are robbers and rogues that need to be thwarted, attacking villagers. You can eventually build homes, farms, and grow animals to ride around on. You can create things for the trade route as well.

Some RPGs battles are turn-based. This one isn’t. Battles start as you approach enemies and right click, and then you have a hot-key panel of attacks that you can dole out. It’s best to keep your eye on the panel and the cool-down timers so that you can sequences things quickly. It’s enjoyable that for some enemies this does require an actual bit of strategy. Some maneuvers deal negative stats on your opponents, such as “bleeding”, causing them to lose stamina more quickly. Selecting your initial move can make a difference. At first the battles are easy peasy but after a few hours into the game, things get a bit more challenging. The only annoying things about battles are respawn timers. If you die a lot you can spend a few minutes staring at your screen and waiting to respawn. 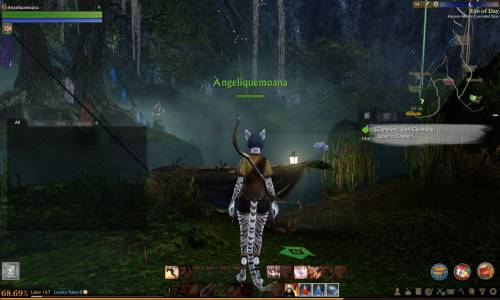 The graphics are fairly accomplished. The game’s official release date was in January 2013, and the graphics are what I’d say you’d expect from a higher quality 2013 game. Lighting is good and textures are nice. It also doesn’t take heavy-duty graphics cards to run. I was able to play this well enough on a Toshiba laptop with an Intel graphics card. Although the better your capacity, the more stunning the environments will look of course.

The art style is very aesthetically pleasing. The art for the narratives is also done through a style often seen in anime: panning still-pictures of what look like watercolor paintings while the narrator provides a bit of story. The setting is supposed to be very medieval, but the art style is as though European and Asian influences joined together to create the environments. Playing as the Firran race, the characters and locations kept reminding me of the “Kung-Fu Panda” art style. The classical china-style music that plays in the background during your travels might have also reinforced this notion.

In Archeage, there is a sizable list of hacks. Some people use teleporting and radar hacks. Crazy fast teleporting allows the player an unfair advantage in terms of mining and farming. It also gives them an upper hand for trade runs. Bots are an issue, as they are disruptive to the game’s economy. The hack that is most complained about on internet forums is the land-claiming hack. It allows a player to see which plots are available so that they can teleport straight to them and spam out the building button, guaranteeing them land in various places that are often spread out.

Did I have fun with my 9 hours of game play on Archeage? For a MMO, yes I rather did. And I typically bore of these types of games easily. It’s a game that can still be playable if you stick to quests and don’t get too ambitious. Or else, join the ranks of other hackers because of the “if you can’t beat them join them” mentality.

The quests were fun and the world is definitely immersive. The characters are intriguing. The background story is intriguing enough. It’s nice that the battle mechanics involve a bit of strategy and aren’t just creating the illusion of strategy, like many games often do. The battle-play might take a tiny bit of getting used to at first, to figure out where everything is located. But it doesn’t take long to figure out and the game does a good job at explaining those small details that you might miss. It’s great that the whole thing doesn’t feel like a huge grind that wears you thin. These elements alone can make or break any RPG.

In my opinion it is a wonderful game in terms of what you can still do. The lack of ability to be too ambitious in it could be a player roadblock, but there is still potential to be enjoyed.

This is a review written by Vanessa Benoit and published by Angelique Stokes.

Vanessa is a new up-and-coming author who enjoys freelancing for ghost writing, blog-writing on various subjects, and reviewing games. One of her favorite novelists is Christopher Moore and her favorite book series is Sherlock Holmes.

Vanessa was born and raised on Maui, Hawaii.

Is Runescape Worth Playing in 2016?