Dark Orbit Reloaded is a free-to-play browser MMORPG. The general idea of the game is spaceship warfare, but with a strong emphasis on upgrading your own ship. I usually don’t flock to these types of games, but I found that Dark Orbit started to grow on me. 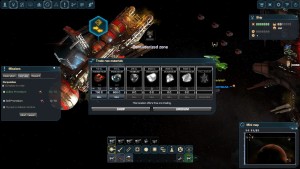 Since Dark Orbit isn’t a client-based game you simply need to create an account to play it. The registration and log-in process is simple, so you are playing the game within minutes. The first thing you are prompted with is the choice between three factions. I ended up choosing the Mars-based faction, but I didn’t find there to be much of a difference between the three. After selecting aforementioned faction, you’re immediately thrust into the field of play.

At first glance, Dark Orbit seems very overwhelming, cluttered, and statistic intensive. While the latter is true, the first two are not. After a quick poke around, you will find that nearly all the HUD overlays can be switched on or off, and also moved. To its credit, the game’s tutorial does an excellent job baby-stepping you through the basic controls of the game. Not only does it explain everything clearly; it’s also a fun tutorial.

For a newcomer to the space battle genre like me, I was worried I would quickly be overwhelmed with information and things to remember. This was not the case though, and Dark Orbit does a great job helping even the newest of MMO players to understand it. 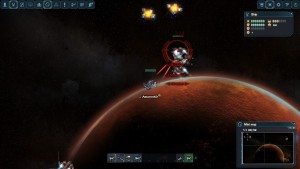 The basic gameplay involves taking your ship out into numbered sectors, wherein you’ll battle hostile crafts, as well as mine resources. These resources are used in a refining system which can help you upgrade your ship. There doesn’t seem to be a standard level progression system, or at least I didn’t notice one. In fact, the tutorial quests eventually quickly fall off and you’re left to fend for yourself in the big open world. With no level indicator on enemies, it’s sometimes easy to unknowingly roam into high level sectors. 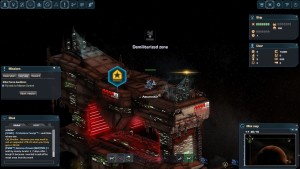 As you play Dark Orbit, you’ll eventually encounter a wall of difficulty. This is due to the combat being very much a numbers game. The most important thing is how much damage your ship can do, not how well you can shoot the guns. Combat is a satisfying but simply affair. Simply clicking on an enemy will lock-on to it, and then you attack it by using hot keys with your assigned weapons. This is satisfying, and the enemies give a good explosion when defeated, so the entire combat system is fun on its own merits. Eventually though, more difficult sectors house more difficult enemies, whose weapons will tear your ship to shreds. I spent many hours grinding previous sectors to upgrade my ship and mine resources, but it was enjoyable while I did it. However, those players not a fan of grinding will likely be turned off.

The PvP aspects are often dominated by very advanced players. These long-time veterans of the game often destroy the playing field, and it’s hard for a newcomer to get into the PvP aspect. However, the PvE more than makes up for the time it takes to get there.

Graphically, the game is tough to assess. While it isn’t ugly, it isn’t beautiful either. The backdrops of each sector are very impressive, while some of the animation is very robotic. For a browser-based game though, it runs exceptionally well. There is a slight snow effect that simulates stars while you move; this can get pretty annoying until you learn to just ignore it. Besides that, the game looks pretty good. 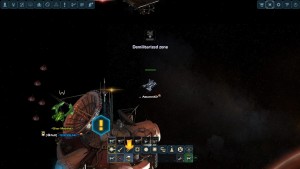 On the audio side, the game sounds good in some places, mediocre in others. The score is very well done, and it creates an eerie atmosphere that immerses you into the idea of deep space. Some of the weapon effects are dull and lack weight, but overall end up being functional. Due to the grindy nature of the game, you will hear the same effects in repetition after a while.

With every free-to-play game, the question about the overuse of microtransactions comes up. Dark Orbit does have a very complex marketplace where you buy ship upgrades and other gear. However, the game does an excellent job detailing what can be bought with the in game earned currency (credits), and the paid currency (uridium). While uridium can be obtained in the game without paying, it’s much harder to come by. That being said, a lot of the really neat ships and guns are only available via uridium, which is disappointing. Fortunately though, the earned currency credits are plentiful to come by, as long as you’re willing to grind.

In conclusion, Dark Orbit is a game that might not be for everyone, but will absolutely be a certain crowd’s cup of tea. For that reason, I recommend everyone gives it a go, as it might be the new MMO you’re looking for. While it’s not going to win any “RPG of the Year” awards, Dark Orbit does succeed what it sets out to do. It provides an engaging playing field that incentives you to spend real money, but it is just as enjoyable if played completely free.