Drakensang is a mythical world inspired by the Germanic folklore and it has been the theme for many singleplayer based videogames. With Drakensang Online, the series makes a bold, yet amazing impact in the online world, as it strives to deliver the same amount of quality in your browser! Drakensang Online brings the same fantasy setting like in the single player games, although there are a few changes here that are quite large to overlook in this regard.

The game in an action RPG at heart, with an isometric view that actually works amazingly well in its case. On top of that, many of the gameplay elements presented here can be found in games such as Diablo or Torchlight, which are great iterations of the aforementioned genre. In fact, even the interface is pretty much the same, although there are quite a lot of changes, mostly generated by the MMO side of the title.

The gameplay on its own is very easy to pick up in Drakensang Online, because you have to select the character you want to use from 4 classes, customize it a little bit, and then get right in the action. You use the mouse to move your character and the keyboard to issues special commands. I found it easier to use a combination of mouse and keyboard, even though many Drakensang Online players are using only the mouse!

Each of the four classes comes with its own skill set, so the more you explore and the higher the experience level that you achieve, the better the skills and abilities that you can gain and use during battles. I think that using the skills in such a way makes the game a lot more interesting, because not only it brings a lot of replay value, but it also brings a ton of replay value to the game as well. 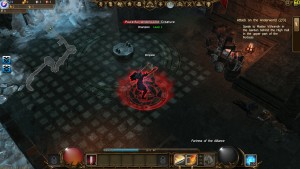 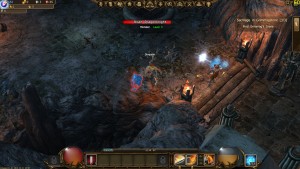 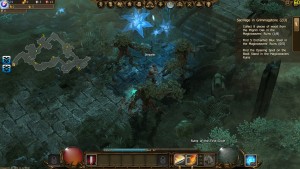 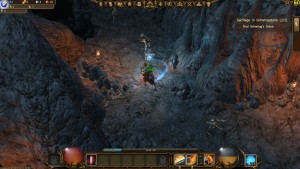 Combat and attacking in general is very simple with Drakensang Online, because you just have to click on the enemy and it will automatically be attacked. Sure, you can also use special attacks with the keyboard, but most of the time I found myself clicking an insane amount of times. The skills are very useful, and you can actually attach them to your mouse buttons if you want to get even better results in the end.

While exploring the game world I was pleasantly surprised to see that you can actually find a plethora of levels, each one different from the other. This is a nice change of pace if you take into consideration the fact that many developers actually reuse content. Drakensang Online is far from that, because it simply shows a high amount of quality at all times, and it stays consistent, which was great for me.

Drakensang Online does come with a few locked dungeons where you have to purchase andermant pieces, the in-app currency, with real money if you want to get in them. Unlike many other purchases in MMOs, these do make sense because these dungeons offer intense challenges and some great rewards in the form of a very useful and varied loot that you will enjoy for sure!
Based on my experience, dungeons vary when it comes to size, but the unpredictable thing of not knowing what enemies to expected, their level and the overall difficulty make the whole experience one of a kind.

Overall, most of the levels and dungeons in the game were easy to go through, depending on the class. I had a particularly good run with the fighter, which can bring on some intense combos that can defeat enemies with one blow, even though as time passes you need up upgrade these attacks if you want great results. Mages are also a good choice in my opinion, even though they aren’t overpowered, but they do make up for it with their spells that have a large area of effect and impressive visuals.

Most of the time, quests in Drakensang Online rely on fetching items from the game world and bringing them to the quest giver, but there are numerous situations in which they change tremendously based on the story. Overall, most of the missions provide a great distraction from the gameplay, and I think that they are quite good for an MMO.

Each enemy class has various types of denizens, and in the end you will have to deal with a boss enemy that has a lot of health and on which you need to use as many of your skills as you possibly can. I think that the boss fights is where you can find the heart and soul of Drakensang Online, even though there are many situations in which you will die a lot. Coming back to the enemy bosses with new strengths and defeating them is quite entertaining and, most of the time, highly rewarding.

Despite being a browser based game, Drakensang Online comes with a very appealing interface that resembles the one you find in Diablo 3. You have quick access to the skills on the lower side of the window, some fast actions such as inventory or skill access in the upper side, and the remaining important stuff scattered in the far corners. When it comes to the map, you can access it with the help of the M button, and you can access it in the middle of the screen or in the left side, depending on your needs.

One of the things that stroke me as being impressive about this game is definitely the visuals. Drakensang Online comes with some of the best visuals that I saw in a browser game, and that tells a lot! From the stellar character design to impressive game worlds and beautiful animations, everything is rendered in such a way so that it creates an astonishing, vibrant and fun game world that one can explore in any way he wants. I found myself taking a lot of time off from fights in order to admire the scenery, that’s how impressive the game looks.

From a sound standpoint, Drakensang Online is quite decent, with some neat songs played in the background. It doesn’t really impress in this regard, but it’s more than enough to keep you going as you play.

Overall, I found Drakensang Online to be one of the best MMORPGs you can play inside a browser. Thankfully, the title also provides a downloadable client if you want to play it outside your browser, and that works incredibly well, without any lag or other issues. Thanks to the numerous quests, intense gameplay and impressive visuals, Drakensang Online is one adventure that you might not want to miss, and that is why I recommend you to give this game a shot.