Star Wars the Old Republic, commonly abbreviated as SWTOR or TOR, is a currently free to play massive multiplayer online role playing game that was produced by Beware and LucasArts. Something to note about this game is the incredible price tag on its production. Over the course of five years, over $200 million was poured into this game to create the playable experience that it is today. Considering the relatively smooth game play and minimal bugs, it shows. Also a big part of that gargantuan cost was actually the voice acting. Most MMOs NPCs will speak to you in text bubbles. This game however involves actual voiced dialogue. And the dialogue continues throughout the game. I’ll get to the funny similarities to Mass Effect in a second, since Bioware was involved in this, and we do notice some trademarks in game play. 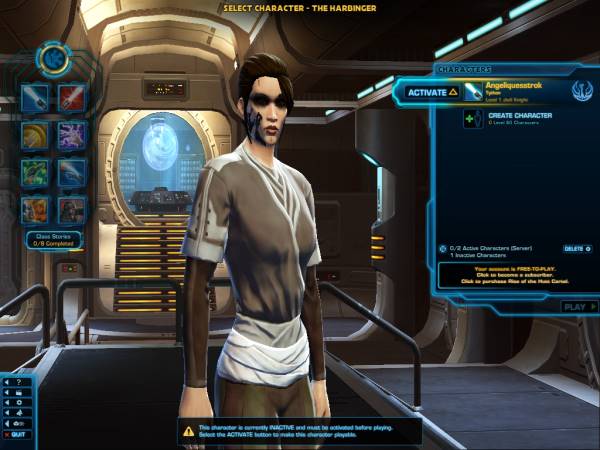 This game straightforwardly asks from the get-go whether you want to start out in the Sith Empire or in the Galactic republic. In the Galactic Republic, you have the option of being a Jedi Knight, a Jedi Consular, a Trooper, or a Smuggler.

I want to say that much of this game reminded me of a slightly less exciting Mass Effect. That doesn’t mean it is inferior, but more-so it means that I prefer faster paced games where I can shoot through hordes of enemies and progress the plot in that manner. But one of the main similarities between SWTOR and the Mass Effect series are the dialogue that often serves as a determinative operative in the game. By that I mean that what you say and who you say it to will have its impacts.

Funnily, anyone who knows the Mass Effect series knows about the “Shepherd lean” or the repetitive lean animation that shepherd often did during conversations. There is a similar animation for the characters of SWTOR. It seems that in the world of star wars, there are two hand gestures, and two hand gestures only. Either the one hand extended in front or, for lack of better explanation the “aliens” meme guy. It’s just an amusing thing that I picked up on.

The other similarity is that of paragon or renegade speech options. In Mass Effect you could play either saint or douche bag. In this game’s case, you can stick to saying things congruent with “the light” or you can revert to “the dark side.” This adds a bit of interest to game play, knowing that no matter which camp you started out in, you can revert to either the light or dark side. You can ultimately decide how to progress your character. 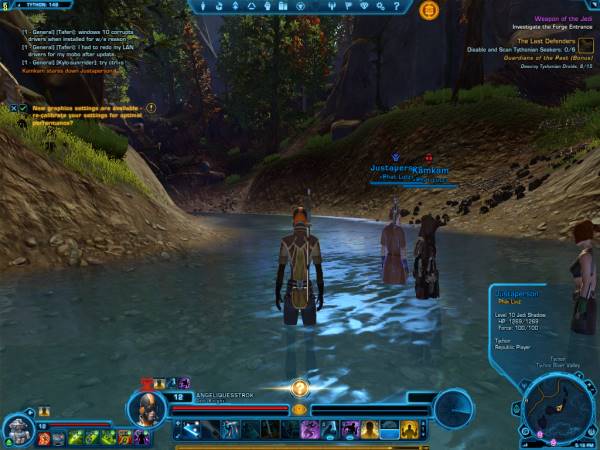 The world itself is rather fascinating in concept. It seems small at first until you realize that your story is definitely not going to resign itself to a single planet. You have your starting planet depending on which class of player you chose. From there, after level 10, your story begins to take you to other planets. In total the game-makers made twenty six planets, but access is limited by the storyline or faction you choose and how far you advance in level.

In this review, I played through all that the world of Tython had to offer its beginning Jedi Knight. This world was deceptively simple at first but exploration led its way to great ravines, caves, and many lush green trails. The world is certainly Earth-resembling for all intents and purposes. Also the fact that there is a quick travel option is greatly appreciated, considering how missions can be a tad spread out. The Jedi temple was well executed artistically, but I felt that it could have been more intricate.

Also take note that as an MMO, you are constantly running by other players playing out their own story lines. You can team up with others and take on missions as a group. Seeing as I was rather new to the game I didn’t grasp the feature too well. However there were a few instances where my journey seemed to synch up with another player and our conjoined effort really aided in some battles.

SWTOR is absolutely story rich. Being that the game is slow-paced however, it can take a few missions before the story really starts to take off. As a Jedi Knight I was to train as a new guardian for galaxy during a dark time in the Jedi Order when many Jedi had recently died from manslaughter via the sith. As the story progresses you find that of course, the story is not black and white. Some Jedi have gone rogue and turned on the order, feeling that it had grown weak and impotent. As you are about to go to training grounds you discover that it is being attacked by “flesh raiders.” I know. Just about every sci-fi has mindless war villains with similar names. They are either reapers, raiders, husks, vorcha, or other names involving “flesh” to add a visceral element.

Anyway, they have been attacking an alien group called the Twi’leks. You find that the flesh raiders have been ingesting elixirs that make them hyper vigilant, aggressive, and also strong. Your missions on your first planet of Tython logically include destroying and disrupting their efforts, while helping the Twi’leks and their matriarch. Oh, and you totally have a cute little droid that follows you around. And near the end of your journey on Tython, you forge your first personal light saber.

Combat is nothing new for MMOs. It is not turn based but occurs in real time and involves a hot-key panel of various attacks, many of which you learn as the story progresses. Attacks have cool down timers and some require “focus” before they can be used. In this case focus just seems to be another word for swinging your light saber around frantically (your basic move) at your enemy until the focus bar amps up. It is worth noting that once you gain a droid companion, this little robot guy really adds to your combat strength. In a few instances I was even able to sit back and watch as my droid effectively shot my enemies for me. Sometimes battles are easy. But it is worth noting that I still did die now and again. So I appreciated that the game did challenge me a bit.

The game opens with beautiful cinematics and incredible intricate fight scenes, atmospheric environments, and well-detailed characters. Well, enjoy it while it lasts because the only cinematics you get are these trailers in the beginning. The game itself doesn’t lend itself to any cut scenes, which I personally enjoy in my RPGs, but this game was free after all.

Not Pay to Win

You don’t have to pay to win at this game, but you can certainly pay for upgrades, customizations, and other perks of having a subscription. 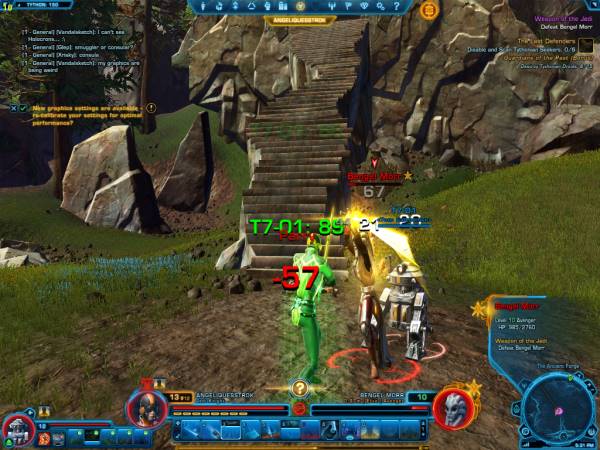 The game was very well executed. It is a bit slower-paced but includes all of the great elements of good rpgs, as well as mmo benefits. It sticks true to Star Wars script. The force is mentioned abundantly, and often. As a Jedi I even enjoyed a dialogue where I was able to pull a persuasion. “These are not the droids you are looking for” is the famous line from the movies. I was amused to see something like that included in the game. The music throughout is spot on and very much in tune with the Star Wars universe. I’d say this is a great game for true fans that enjoy MMORPGs. However, if you want something action-packed with cut-scenes and tons of folklore about alien races with whimsical sci-fi plots, just play Mass Effect. Or if you already have, chances are you will like this game for its similarities.

Back to the Best MMORPG 2016 main page

« Starbreak Review
A Tale in the Desert Review »