Starbreak is a casual MMO that you can play on your browser for free. It is a co-op 2D platformer game set in a science fictional developed by Crunchy Games. Here is a review by Nhart. 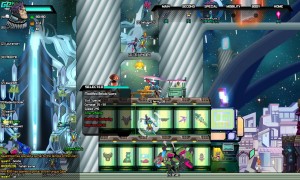 First off, I would warn anyone who has trouble with random flashing lights/minor explosions to take caution with (if not avoid) this game, as the initial tutorial – which is played immediately upon starting – is full of them.

That said, Starbreak is a classic mix of a space-age MMORPG, and a side-scrolling platformer. More inclined toward a casual setting than a competitive, I’d recommend this game to anyone looking for a game with a bit more of an old-school feel, or something to play with friends without requiring too much in-depth knowledge of the game’s lore. You will, however, require some patience with this game, as explained below… 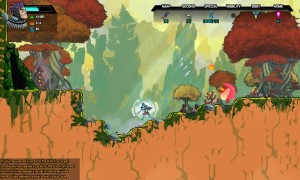 Starbreak is a game which makes up for its two-dimensional graphic design with bright colors and decently detailed background and character designs. However, this only really applies when one is playing in a regular window/tab. Once you go to fullscreen mode, the game becomes less about “oh, nice background” and more about “why is my game suddenly lagging obnoxiously?” This can be annoying if you prefer your games not be restricted view-wise, but can be avoided. The same can be said about the music: while the tunes themselves are not overtly annoying, the constant loop that each part seems to be stuck on before continuing can be. However, the music can be muted, and – like the lag – can be easily avoided. 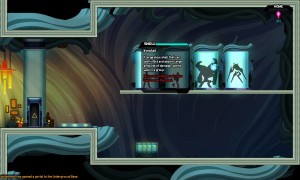 In Starbreak, you do not play a “character” per se. Beyond your username, you take on the role of what I can only assume to be a glowing blue ball of spiritual essence. This essence settles itself within one of four pre-set “shells” which gives your character its appearance and weapon restrictions. If you die within the game, you are instantly overtaken by an explosion of light, and turn into this floating orb (which honestly looks like a floating blue ball of spiritual fire) and can freely wonder around the level, seemingly invulnerable to damage (if the enemies even attack at all) until you return home and access a new shell (more of which are unlocked as you progress through the game).

The gameplay, on the first attempt, is best described as “not bad.” The pre-set controls make attempting to move and attack (via replenishable grenades and infinite shots of laser/plasma) are awkward, but can be re-set through the controls menu to something more manageable.

The game itself brings to mind my old days of playing Mario, if Mario had the gun-style of an old school spaceship shooter (you know the one – dodge around and shoot in all directions while spinning your tiny ship on the screen).

Different levels are accessed at any point in the game, with their own rank of difficulty, and a warning that higher levels should be taken on with friends, and not solo. Fairly simple, but enjoyable.

However, there is one thing about the game which bothers me to no end: The monsters/enemies/however you wish to refer them, do not regenerate. I do not say this in regards to playing by myself – rather, it’s an issue when other players are in the same world in you (which is pretty much guaranteed to happen, considering the game is an MMORPG) and are fighting monsters ahead of you, because this will leave you with nothing to fight but the open air and your own bitter emotions about the whole thing. As someone who prefers to actually play the game, this annoys me greatly.

Starbreak is not too bad of a game, if you’re looking for a casual source of fun for you and a couple of friends, and don’t mind racing against other characters before they quite literally steal any kills there are to offer. Personally, I would not play this game again.

Cole is a freelancer from Florida who is a full time English student with a passion for writing and an immense love of RPG games – the more choices to regret or praise, the better. She has worked with three companies on 76 projects. When not doing that, she spends time browsing on tumblr, and changing the outcomes of games via fanfiction (Mass Effect 3, anyone?).