Storm Riders is a fantasy style MMORPG in which the player takes on the role of one of four warrior characters. Two of the warriors relate to the main storyline in which Lord Shong, a ruthless conqueror of the battle clan “Alliance Under Heaven” has received a prophecy, telling him that two warriors will either bring great victory to Lord Shong’s clan, or destroy it completely. Determined to avoid this, Shong has forcibly taken the two boys has his own students, only for them to discover their mentor’s evil treachery.

This brings us to the main story of the game: defeating as many enemies as possible as the player works towards defeating Lord Shong, and saving the ancient, magical land of Far East from his wrath. 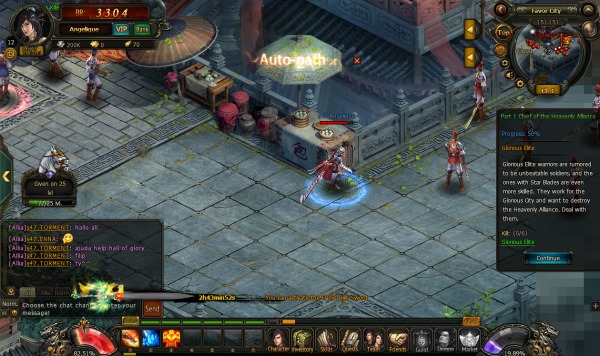 The overall style of the game is fairly simple, making using of an angled top-down camera view and three dimensional characters of minor graphics. The music itself appears to be of an oriental, feudal ethnic style of which is both hypnotic and lovely. It does not often change beyond the intro gameplay, regardless of whether the player has encountered battle with an enemy or not. 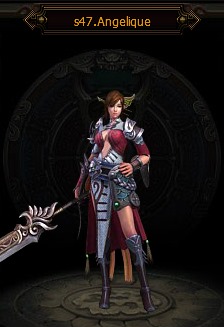 Each player has the option of taking on the role of one of four characters of which they can freely change the name, although further customization is not an option. The main male characters (from which the story of the game – based on the famous “Wind and Cloud saga” – comes from) are known as – you guessed it – Wind and Cloud. Cloud is a fiery warrior with glowing red eyes, whereas Wind is a soulless (but good hearted) magical warrior. The other two options for characters (both female), are Dream, the daughter of the Saber Emperor, and Ash, an Asian femme fatale “ready to follow the Cloud to the end of the world.” Despite the claim of different character backstories and fairly obvious design schemes, the characters’ fighting styles are – for the most part – the same in terms of using a combination of swordplay and magical skills. These skills can be unlocked in-game by earning a set of points known as “spirit points.”

One feature I was particularly pleased to see was the inclusion of a short video with each potential skill to unlock, showcasing the effect and design of the ability, so players can decide ahead of time if this is something they want to spend their spirit points on.

Levelling up characters is not difficult, but is balanced by the fact that there are several skills and parts of the in-game world which are restricted to players of specific levels, giving them a reason to want to focus more time to building their character, regardless of how easy it is. 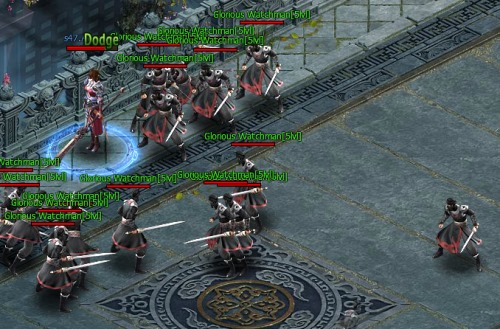 This mouse controlled game begins with an odd introductory video. I say odd because there is no explanation, nor warning beyond two movie-style text boxes announcing that the player must fight against the Emperor, and stop his men from attacking. As the game is automatically set to an auto-pathing function (set to an extent in which the player could avoid playing altogether, and simply watch without ever having to lift a proverbial finger), this can cause great confusion – in a way, it is like a game demo in which playing is optional, but you are still required to see it before the real game can be enjoyed. There is no tutorial to be found, a feature which more experienced MMO gamers will likely find some happiness in. Once this short battle is completed, players are introduced to the true game world, and are free to follow questlines and explore at their leisure.

Storm Riders holds a unique style of format in that the enemies are – for the most part – human soldiers, rather than the typical mix of animal and minor fighters one would expect to find within most fantasy MMO games. Each style of enemy appears to stay true to the overall Asian style of the game world in the form of warriors similar to samurai, and soldiers clad in the oriental style armor one may recognize from Asian history.

These enemies are guaranteed to appear in large crowds, although the way they move together in unison, surround the player character (though surprisingly this does not guarantee they will all attack at once, suggesting a lost opportunity for an extra game challenge), and – if one attempts to flee in the middle of a battle – pursue the main character, perhaps the term better suited to them would be “swarms.” These enemies hold relatively the same strength of attack, though the amount of health they hold varies from each style of enemy. They will usually stop attacking if the player puts enough distance between them, or simply stops responding long enough. Health regenerates automatically during the game, both within and outside of battle. 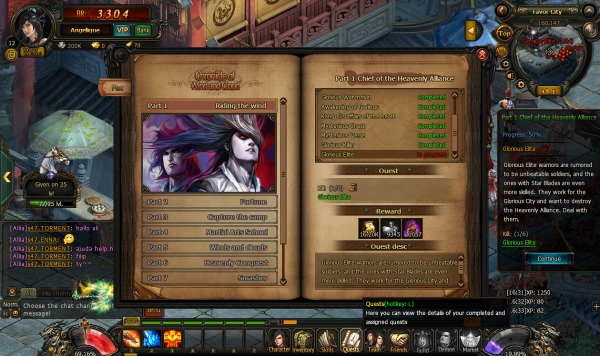 Storm Riders provides incentive for players joining up with their friends to take part in the game. Not only do players have the opportunity to fight alongside and chat with their friends, but they can also join or form clans and guilds in which to do so. The major incentive comes in the form of teaming up and training with other players. When one does this, each player gains the bonus of earning more experience points per battle, as well as an automatic stats boost. Unlike most MMO games, working alongside players has a benefit beyond having someone to talk with and fight beside.

To sum it all up, Storm Riders is a fairly simple MMORPG game. Personally, I would not play it very often, although it has proven to be a good way to pass an afternoon if one has time to kill, and is not looking to become too deeply invested in a new game. This is not to say that Storm Riders is to be overlooked, however. In fact, I would say that given a bit more tweaking – and a little more focus to the quality of gameplay, rather than the speed – it has the potential to be a very great game.