Stormthrone is a new free to play browser-based MMORPG with 2D graphics that launched its open beta phase last April. I played it back then (when it first started) but to write this review I made a new account on the newest server, Knights of Light. 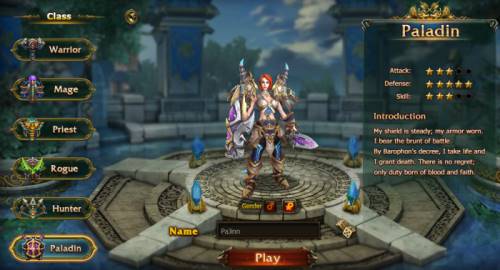 The screenshot above is the character creation screen where you can choose from one of six unique classes – Warrior, Mage, Priest, Rogue, Hunter, and Paladin. There are no races to pick since all the player characters are humans only though players can play male and female characters.

On the right side of the screen when you click on a class is the star rating of each class’ three main attributes: Attack, Defense, and Skill. As you can see Paladins are strong in defense (5 out of 5 stars) but weaker in both attack and skill (3 out of 5 stars). So this is the tank class. The other classes have different strengths and weaknesses. For this review I made a Warrior which is balanced in terms of attack and defense but weaker in skill.

This is the first screen you see after you create a character and start playing. As you can see, the screen is pretty full of various icons that can be pretty confusing at first. I would have preferred a cleaner UI.

Nonetheless, the beginner tutorial is easy to understand. I just clicked on the first quest and off I went to start my adventure. 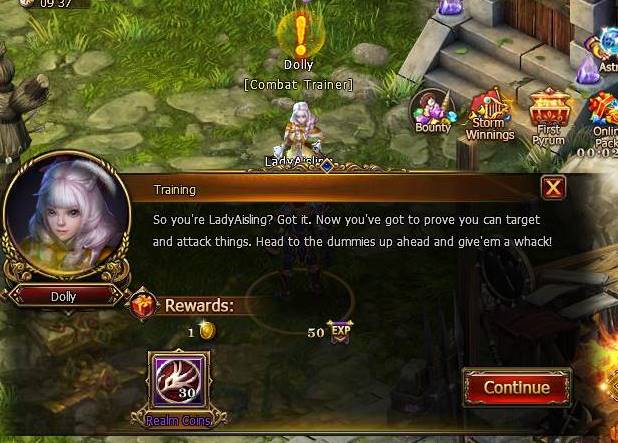 Quests are not too complicated. Players just click on the quest list on the right side and their character automatically walks toward the NPC quest giver. The NPC will have a yellow question mark floating above its head. When clicked, the quest dialogue pops up, as you can see from the picture above.

Quests are the standard “kill x number of x mobs” type of thing. For example, “kill ten centaurs.” After you kill the correct number of enemies you get a reward.

One thing that’s very nice about quests is that they have good voice acting. As you play, NPCs will often speak up and say stuff like: “Dawnhold has been surrounded, hero take your weapon and go fight!” or “Wayne’s in danger, you have to help him!” which really helps in the immersion aspect of the game. 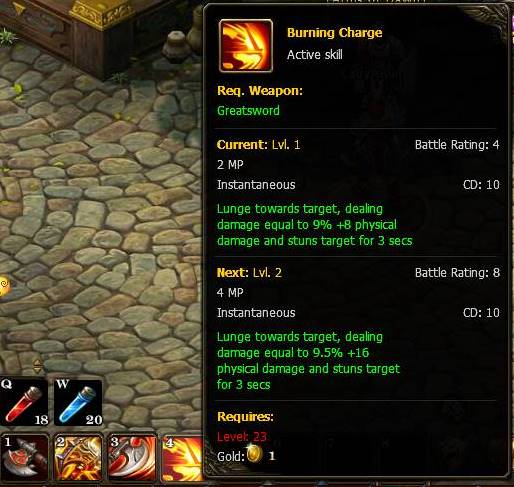 Surprisingly, combat happens in the open world. Most other browser-based MMORPGs have instance-based combat but not in Stormthrone.

Combat consists of clicking on a target to select it manually, then pressing some buttons to deploy a combat skill. The skill toolbar is at the bottom of the screen and you can also click on the skills with your mouse to use them. It’s pretty standard fare for browser MMORPGs.

Enemies in the open world all seems to be aggressive so exploration is dangerous. You can’t just walk past mobs without being attacked. In fact, often when you go to a quest NPC you will get targeted by mobs and have to kill them before you can talk to the NPC. 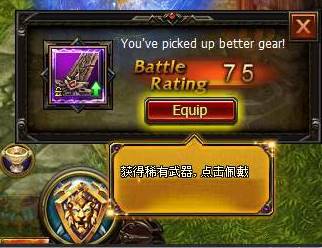 When mobs die they drop the usual loot – coins and items. Of course, the most valuable items they can drop at this point in the game are higher level equipment. Thankfully, you don’t have to manually inspect every item you pick up. If you get an equipable item that is better than what you are currently wearing, a pop-up box appears that tells you to equip it.

Now, as you play you might notice a few bugs in Stormthrone. Some of the text has been left untranslated. You can see in the picture to the right that there is some Chinese text in the pop-up box that is telling me to equip an item.

This is annoying but it doesn’t really affect gameplay that much since the rest of the text is in English so I can understand it. 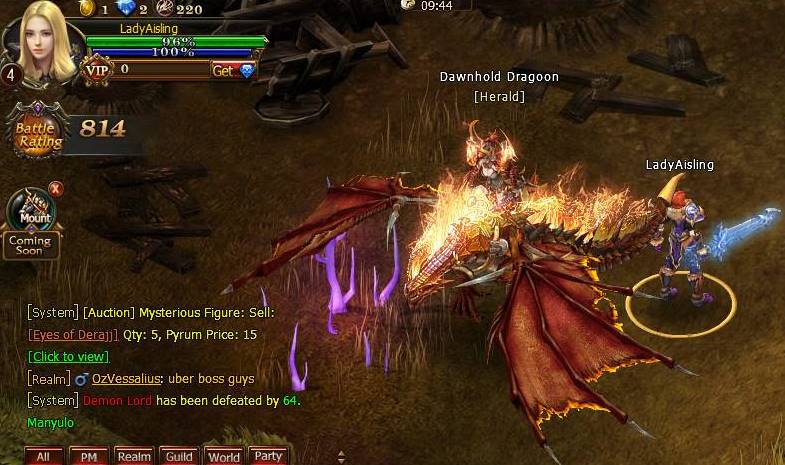 Stormthrone’s graphics are not the best around but it’s not the worst either. The world is colorful and well-designed. Characters and NPCs look great, with detailed armor, weapons, clothes, and mounts. Even the hair and facial features of characters are visible and unique. Skill animations and effects are also good.

By the way, sorry about the slight pixelization in the screenshots posted here. This seems to have been caused by graphics compression in the image program I used. The actual graphics are somewhat better than what you can see here. 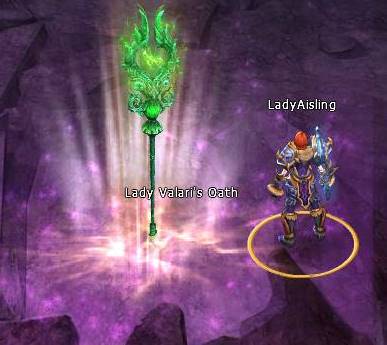 Although Stormthrone does have a story behind it, it’s not that interesting. It seems to be the same old thing – your character is the chosen one, the legendary hero who will weild the legendary Aeon weapons.

Of course, as a great warrior, my character was made welcome in the first town that she went to (Dawnhold) where a bunch of enemies were attacking. I fought the attackers, defended the town, and rescued a few people. Then I retrieved one of the legendary Aeons, the Lady Valari’s Oath which seems to be a magic scepter.

I wasn’t exactly biting my nails in excitement but I guess it’s nice to be a hero.

Strangely, although I was told that the scepter is now mine, my character was still using her two-handed sword. Hmmm, it looks like the Aeon weapons are more of a mystical item that your character won’t directly equip. 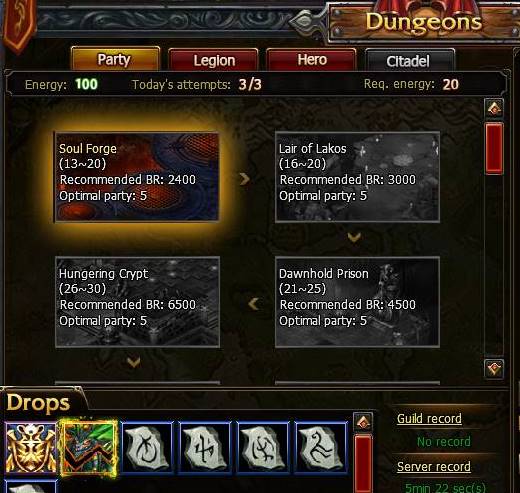 Dungeons in Stormthrone are instanced. As a beginner, only one party (group) dungeon was open to me. Entering one is quite simple – I just clicked on the “quick match” button and I was automatically in a party with another player.

Even though the dungeon’s optimal number of players in the party is 5, since a much higher-leveled player joined my party, we entered with just two people. To my surprise, when I was inside the dungeon, two NPC allies appeared. Cool!

Sadly, the higher-leveled player did not want to waste time killing all the mobs so he rushed ahead and killed the boss. I wasn’t even able to get to the boss before he killed it, probably in one hit.

I did get some sweet loot so that was alright. 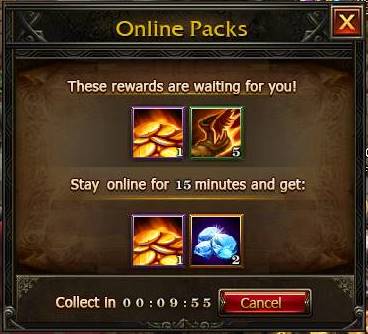 There is a free giveaway code for all players which you can find at http://stormthrone.r2games.com/code/. This gift code just gives a small amount of newbie items but it’s free so I can’t complain.

For beginners there are online packs that you can get for free. Just click on the “online packs” icon on the upper right and you will get free gold and pyrum (the premium currency that you can buy with real life money).

Players can complete tasks that are rewarded with pyrum. If you click on the “Beruva’s trials” icon you will see a screen that gives pyrum for doing things like clearing three dungeons or using the blacksmith to upgrade equipment.

In addition, the “daily prizes” icon login rewards (free stuff you get everytime you log in) and level packs that you can collect when you reach certain level.

Playing Stormthrone was quite fun. The game is new so there are a lot of players around. A tip for new players – make sure that you create a character in the newest server so that you can play with people the same level as you.

There are enough classes that I had some choice of what combat style to play but I would have liked to play a race that isn’t human. The classes are not gender-locked which is cool.

I really liked the open-world combat and how everything in the world was trying to kill me. The combat itself is pretty simplistic which is a cause for concern since it would probably be boring after a while. The party dungeon was interesting and enjoyable.

Overall, Stormthrone offers a lot of features for a browser game. It’s free so it’s worth checking out if you are looking for a fun, casual MMORPG to play.

Back to the Best MMORPG 2016 homepage