Trove is a new free sandbox MMORPG with a different type of gameplay compared to other MMO games. Instead of the usual medieval fantasy setting that most MMORPGs use, Trove has a whole universe full of different worlds. The graphics are voxel-based, meaning they look like blocks or cubes (like Minecraft). Although it has the usual stuff that other MMOs have such as classes, quests, dungeons, etc. much of the gameplay revolves around creating new items using voxels. Here is a review of Trove by Owen.

Trove is truly deserving of it name. There really aren’t that many directives but there are hundreds upon hundreds of quirky rewards to be plundered from the depths of hellish dungeons and crafted near the gentle warmth of your hearth. Trove is a world filled with fantastic colorful realms and dark, dreary ones too. All of which are teeming with baddies of all kinds –those that have you recoiling and those that have you chuckling. 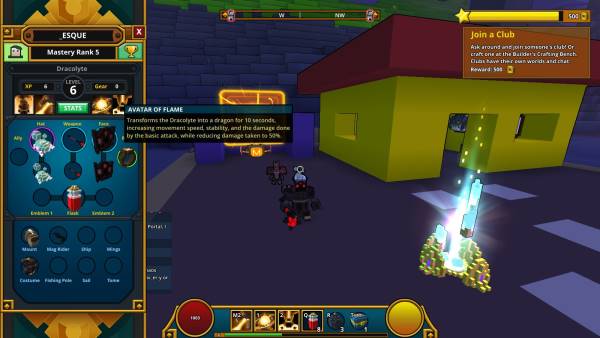 Undeniably, there will be comparisons with a certain voxel-based, sandbox, procedurally generated revolutionary game. Ever since Minecraft popularized block building games, there have been many others that have mimicked the aesthetics and gameplay to the point of genre creation. Unlike many of the other copycats, Trove stands out as a game of its own by bringing smaller, familiar ideas together for a big impact.

When breaking down Minecraft it seems more about the creativity at heart. Trove focuses more openly on the action/adventure aspects, but still has its own way to express creativity in a crucial way.

The voxel editor is the most dynamic outlet in the game for players to add their own touch to the world. The editor allows players to create just about any of the items in the game: hats, melee weapons, guns, masks, even dungeons and lairs – all of which can be incorporated randomly into the world for all to enjoy. This really adds variety to your experiences in the world of Trove, and leaves something new to be discovered each time you play.

There are two player modes to interact with the world: Adventure and Build mode. Adventure mode is essentially the default, while build mode is what you enter to both create and destroy. When you are out exploring and find a colorful block or a useful mineral you can extract it without the use of a crafted tool. Instead of having to assemble materials to craft the tools you need to collect the ingredients you need, you automatically possess Lasermancy to break down the blocks you want. This reduces the unnecessary, excessive grind and focuses on seamless fun. 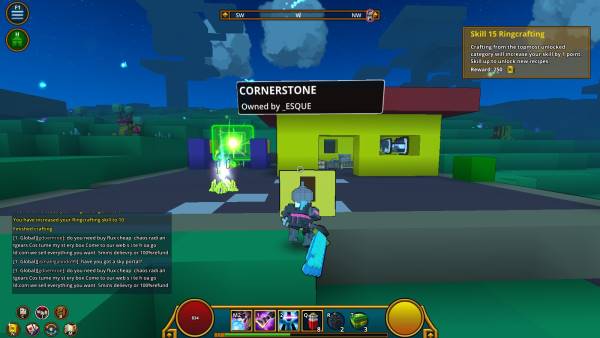 When you start out in Trove you are given a plot of land with a standard structure to develop as you see fit. It is a limited area that won’t significantly bolster your creativity but because of its smaller size it gives you other gameplay benefits.
The wonderful thing about it is that you can instantly transfer your structure to any empty lot, anywhere in the game, so you can move it along with you as you explore. Since it also serves as a respawn point, when the creatures of the world have overwhelmed you, you’ll never be forced to wander the endless world in search of where you were last.

If you get lonely building that little Cornerstone house all by yourself and want to build bigger and better things, there is the option of joining Club Worlds with your fellow players. Club Worlds allow you and your friends to terraform the terrain to your liking, and build enormous structures with more space than you’ll ever need. 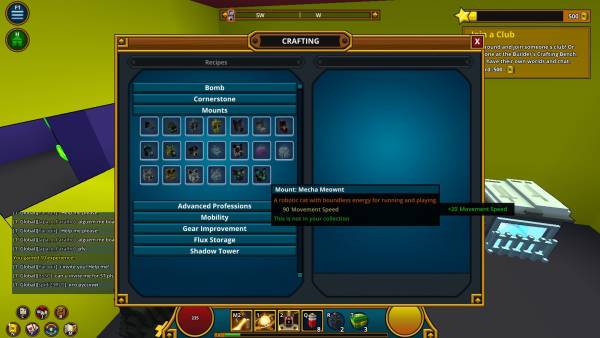 The crafting in Trove is unbelievably vast and detailed with a number of different benches like the Adventurer’s Crafting Bench that can make mounts, the Ring Crafting Bench to create rings that are randomly attributed boosts to particular stats with different tiers of powerful rings, and so many others that create incredible depth in how you want to play the game and how you look while you’re in it. 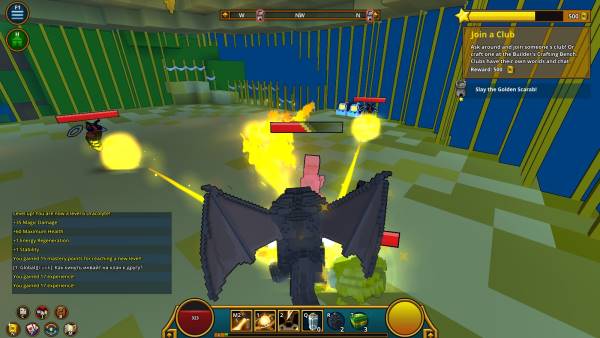 Trove is made up of several different procedurally generated realms ranging from the generic grassy and snowy landscapes to the more unique gloomy neon Tron-esque domain or colorful candy covered lands. Across each of these realms there is a distinct charm. You may be in a typical snow realm fighting the enemies you’d expect and the next moment you’re under attack by a merciless and unrelenting turkey creature out for blood. Trove is all about the fun and doesn’t take itself too seriously with its charming style and zany sense of humor to boot. You can’t help but love a game that names a weapon the “Grilled Cheese Slapstick” or a mask called the “Creepy Quacker” and enemies that include a giant mushroom that waddles towards you in a rage shouting “mushhhrooom!” 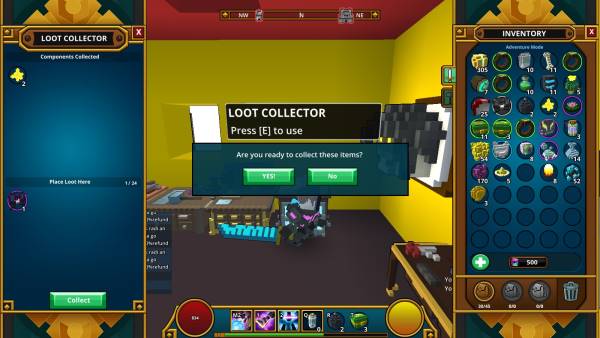 A major part of exploring, a source of some of the toughest enemies, and home to the most sought after treasures are the large dungeons and smaller lairs. What makes this world, as a whole, an unending delight is the creativity of the community. You can personally shape the world you explore and share in the creations of your friends and other fellow players. This is no more apparent than when you come across a community created dungeon or lair. Like most things in Trove there is significant potential for variety and depth, but unfortunately, in this case, as active as the community can be there were few encounters with the player created structures and many repeats of the same. Though when they are found, it’s always satisfying to investigate.

Once you have fought your way to the end of a dungeon or lair and collected your prize, a giant X will appear over top to save others the trouble of searching an empty loot chest and a portal will appear as a means to return you to the entrance. Once again Trove saves you from the inane parts and makes sure you are enjoying every moment and filling it with something interesting. 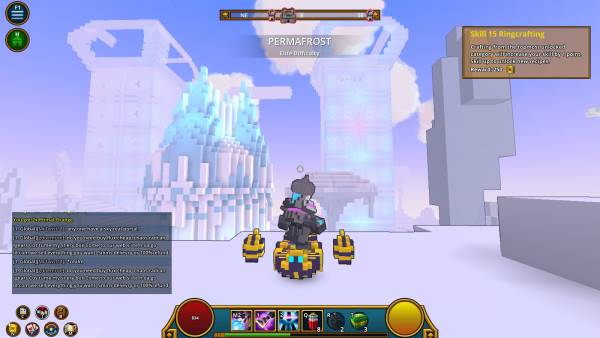 Trove is simple and approachable. Anyone can jump right in and experience the entirety of what the game has to offer, it’s just a matter of exploring and finding it all.

The strength of Trove comes from its charm: the strong focus on humor and fun, and diversity created by the imaginative minds of the community. Trove’s creative capacity maybe somewhat limited in that there are no complex blocks that provide anything more than different colors, but the community still finds a way create creative and awesome structures. There are biomes with loads of personality and things to discover, which Trove succeeds in making as consistently engaging as possible – getting rid of the unnecessary things that don’t contribute to the fun.

In the beginning hours playing Trove, there are very few moments where you’ll be repeating the same specific action over and over again to achieve something. It’s all about fun without the inevitably exhausting resource gathering grind. Sure, there are moments when you’ll need to grind a bit to get all the resources together to craft some items, but it rarely makes the game boring as most resources are relatively prominent if you are looking in the right place.

Though Trove is a sandbox game with lots to see and get, there is the potential for the game to get stale after a while if the community doesn’t maintain a presence and without any specific goals to give you purpose in the potential absence of interesting new things. The ultimate enjoyment of Trove in the long run will be tied to the creativity of its players. As it stands Trove is great, and will remain great for hours and hours to come, so long as there is an active community to keep it that way.