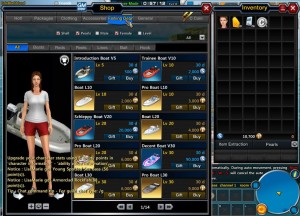 World of Fishing is – in case you haven’t already guessed it – a realistic fishing simulator. Developed by Masangsoft and published by Insel Games Ltd, it is free to play and promises a realistic big fishing experience. The open beta testing phase started last November 3.

Personally, I have never before played a fishing game beyond a generic arcade game, and never really had the desire to after that. However, I’m glad I tried this. Let’s break it down to the specifics: 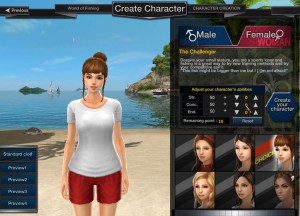 Every player gets their own choice of six pre-set characters (per gender), each of which has their own unique title and description, such as the “Gourmet” searching for new fish (and subsequently, flavors), or the Traveler thrilling over the fact that they’re fishing rather than studying.

While the lack of customization beyond that was a bit disappointing, you can still buy outfits later in the game to make your character more unique, and I personally found some entertainment in the character descriptions.

I was not expecting much graphics-wise from an MMOG. I know the trailer is pretty, and so is the site, but I’ve played plenty of online games with such a layout, and quickly discovered otherwise.

World of Fishing surprised me in that the graphics are actually fairly good for your typical MMOG. The water effects found in both the open-world oceans and your private aquariums are realistic, player detailing is simple but aesthetically pleasing, and general movements – whether it be your player, the scenery, or your boat cutting through the water – are smooth, with no noticeable glitch effect. 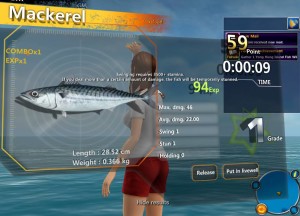 There’s two styles of the game you can play: Freestyle (solo, with the potential of other players being in the world but no interaction beyond chat) and Team Match, where teams can compete against each other.

For a newbie player like me, Freestyle was the way to go. Two things were quickly realized: Each “Freestyle” session has a limited time of a little over an hour, and it’s a lot easier to screw up than compared to the tutorial. The latter shouldn’t have been a surprise, I realize now. Player chat exists no matter which choice you make.

With several international oceans to explore, there’s plenty of places to explore and enjoy. Be warned though: catching fish in this game requires multi-tasking, and each breed of fish has its own level of difficulty. You have to be able to use the controls, and keep careful watch of gauges at the top of the screen, which could quickly determine whether you catch the fish or stare in disappointment at the screen. In a way, this makes the whole aspect of catching the fish feel like a battle. Once caught, you’ll be able to check out the fish’s statistics and decide whether to release it, or keep it. 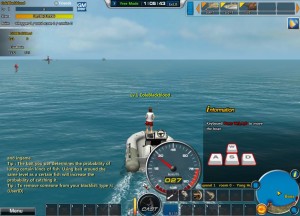 Fish which are caught can be sold for money, which can be put towards new equipment and boats (ranging from a simple motorboat to a larger scale fishing boat), or placed in your own private aquarium, to browse at your leisure. You can even set your aquarium as a screen saver, if you so wish. Catching fish also serves to fulfill quests, which can also lead to currency for new equipment.

Overall, World of Fishing is a pretty good game, and a very good realistic fishing simulator. I haven’t fished in years in real life, but re-learning from the tutorial made me feel like I was back to learning with my dad. Anyone who enjoys fishing will be guaranteed to enjoy this game, but I would encourage even casual simulator players to give it a shot.