Defiance is an open world, science fiction shooter based MMORPG. It is unique in that the game can be found not only as a PC download, but is also available on the Playstation 3 and Xbox 360 (with Xbox Live Gold membership). 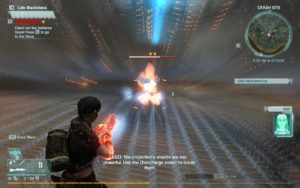 There is not much music to be found within Defiance, which – in a way – is fairly typical of most shooter games. Thankfully, the various sound effects and worldly immersive background noise serve to mask this fairly well for anyone not fond of a silent game. The graphics are of a high definition, three dimensional quality, although the continuous glitching of both the playable and non-playable characters – resulting in a sort of “double vision” effect, which is quite distracting – makes this, unfortunately difficult to fully enjoy. Looking into the required specs of the game has shown this to be an error on the game’s part, and not the result of an underpowered machine.

As the player character, you have a fairly unique format in terms of customization. Beyond the general choice of skin tone, eye color, hair style, and hair color, Defiance also allows the opportunity for choosing things such as bone structure, tone of voice, tattoos, blemishes, and face paint to further change up the character. Naming is completely up to the player, with an option for first and last names, so long as the name is at least three characters long.

The player has an option of two different races (human or alien), with one unlockable alien race, all three with the option of being either male or female. There is also the opportunity to choose the character’s background from one of four “origins” (which will also affect the clothes they wear during the intro): Veteran (a character with soldier’s training), Survivalist (an explosives expert whom learned to survive the harsh lands following the war), Outlaw (one who was forced to turn to a life of crime), or Machinist (an engineer with proven mechanical skills – sometimes to their advantage, sometimes not). There is also the choice of one of three “Archetypes” which represent the overall facial structure of the playable character.

In the game Defiance you play a scavenge specialist (and gun for hire) known as an ark hunter, amongst a group of several others. Following a mysterious attack on the military ship transporting you and the others, you find yourself to have crash landed on an unknown planet, forced to scavenge for weapons before you can track down the man whom hired you as an ark hunter: Karl von Bach. 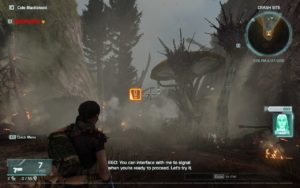 The NPCs consist of several companion characters briefly found in the beginning cutscenes of the game – although they are not all named until sometime later, due to the sudden onslaught mentioned in the previous category. Many of these characters are high ranking members of the Defiance, having fought in the previous Battle of Defiance. One of the most prominent characters is “EGO” – a holographic projection of a woman representing your own “EGO” powers who teaches you how to access them and guides you during the initial point of the game, following the crash.

While aesthetically and euphoniously pleasing, she can quickly grow very irritating in the beginning of the game, for if you do not follow through with her instructions in a matter of seconds, she will continuously repeat her command. To say she sounded like a broken record would have been an understatement. This is made worse by the fact that alternate menus – such as the map or settings screens – do not silence her in the least. In fact, you will instead find yourself faced with a pop up of her dialogue showing up every five seconds or so, if not less, and her nagging reminders to get on with the game.

Players have the basic options of communication with fellow players and interacting with them within the many worlds of Defiance. Along with this is the “Matchmaking” feature, which – from its description alone – is honestly questionable in terms of its overall usefulness in the game. Supposedly it was used as a gateway to co-op maps and challenges, but has now reached a point of being completely inaccessible and/or filled with glitches for many players. What I find odd, is the fact that a game which is already multiplayer by default, would ever require a specific area for co-op maps and challenges, unless these were made specifically for small groups. Regardless, it is a feature that may or may not be still available, so view it at your own risk.

Defiance is a game played with a mixture of the keyboard and mouse. It is a classic shooter game, with a number of customizable guns, shields, and explosives available for battle against various enemies, although these enemies seem completely determined to avoid the player until the tutorial is finished. Aiming properly has proven difficult given the overall sensitivity of the mouse feature, and the constant stuttering of the game, which does not seem able to handle a player moving quickly (which is the average speed of the controlled player itself).

The game is made slightly more immersive in that players are required to keep an eye on their ammo count and reload their weapons as needed, rather than have a seemingly endless supply of ammo in an endless clip. Defiance also has the bonus of not having a set “end” to the game – rather, there will always be a number of quests, battles, and activities available for players to take part in, including events hosted by the game makers themselves.

All in all, Defiance is a well-designed game. The plotline is strong and immersive, and I greatly enjoyed the beginning cutscenes which introduced the world and story of the game. My only major complaint is the high number of glitches to be found within Defiance, mainly focusing on a stuttering and double vision effect. If this can be ironed out (or is strictly a PC problem, and is not found in console versions) then I would say Defiance is a game any fan of sci-fi shooters should check out. It has got plenty of potential – it just needs a little work.