Get ready for an overdose of cuteness and pink! The Hello Kitty Online review is here and it’s super kawaii.

Hello Kitty Online is a click-based, magical MMORPG in which you – the player – are brought to the land in which Hello Kitty resides. She has grave news upon your arrival: all of her friends have been cast into a magical sleep by a mysterious stranger. It is up to you to find the keys which will unlock them from the magic bubbles which incase them in this eternal slumber. 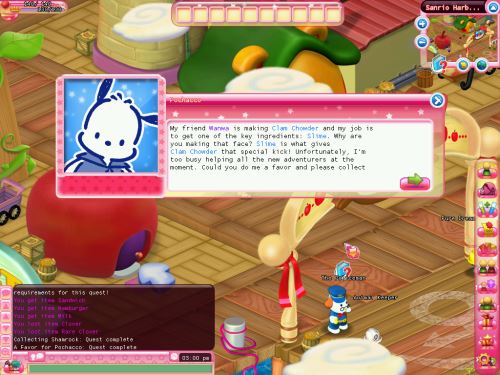 Hello Kitty Online was surprisingly not nearly as “pink crazy” as I initially expected it to be. Rather, the game incorporates a mix of pastels, bright colors, and dark colors to create a vibrant and magical world. Some aspects of the graphics are more detailed – such as the characters which you encounter, or the player character themselves – but for the most part, the game incorporates a simple, cartoon-like style which anyone may recognize from the online world games of their youth.

Everything also has the constant moving aspect found in most cartoon games – from interactive plants to random monsters, it will be difficult to find something which is not bobbing and weaving around as you make your way throughout the world.

The music itself is a lively mix of upbeat and cheerful tunes yet are catchy enough that they avoid the annoyance generally expected with repeating music. Given the similar cheery theme to the game, it is really quite fitting, and enjoyable to listen to while playing.

MMORPG Aspects: Hello Kitty Online provides the basic chat feature found within most multiplayer online games. However, along with this, there is the opportunity for players to take part in various mini games (such as Kart Races, Sudoku, or various forms of matching games) in groups, or even team up to form “guilds” with other players. What is most curious about the game, is that in general gameplay, you do not seem to be in a world with other players, outside of when you are playing mini games. This could be just a case of an empty world, but given that there is only one available (and shared) for both the United States and International world options, that would be very unusual indeed. 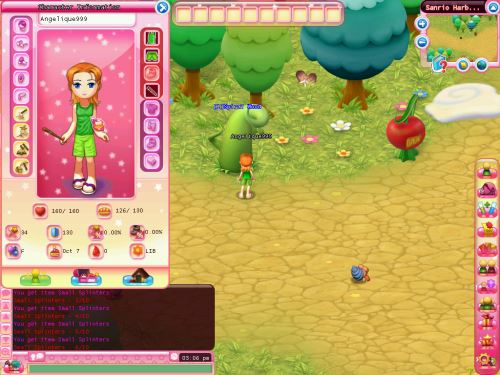 Gameplay (Characters): The characters of the game are all cartoon style with names ranging from the creatively fun to absolutely ridiculous. Besides Hello Kitty herself (claimed by the creator to not be a cat, but rather a little girl) your player character is the only human to be found within the game. As the player character, you have access to various tools, outfits, and pets available in the game (including some which are purchased using a special store – the currency which is bought in the real world). You also have eight “skills” which will increase as you work at them in the game: planting, gathering, woodcutting, mining, tailoring, cooking, carpentry, and foraging. The other characters available for interaction take the form of various animals, such as panda bears and dogs. There is also the very common snake characters who serve as the “working men” of the world, taking on all construction duties as well as providing access to mini games. How they manage to get anything done with no arms is anyone’s guess…

Gameplay (Overall) The game begins in a tutorial world known as “The Dream Carnival” – a world big enough that it could be considered a game of its own, in which the player is introduced to various aspects of the game, and is free to explore and practice them to their heart’s content before moving on to the “actual game”. Once you have left this world, there is no returning to it, nor can you bring any money earned within this world into the “real game world”. 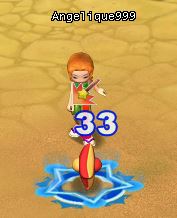 As the player character, you have the option of accepting quests from various characters found throughout the worlds of Hello Kitty Online. These quests are typically monster “fighting” (in truth just knocking them out, usually for items), delivering messages/packages, or gathering ingredients, either from the wild or from growing them yourself. This earns you – along with items such as food for restoring Action Points and Energy Points (stamina and health respectively, both automatically regenerative) or new clothing – points known as “friendship points” which can lead to your character levelling up. If questing isn’t your thing – or if you just grow tired of roaming across the map – several other options lay at your disposal.

Players have the opportunity to start and maintain their own farms within the game, as well as build their own houses from scratch. There is also the opportunity for owning pets, such as Hoodibugs (little square, tree-like creatures), Chargeers (little white horses resembling unicorns), Sweetcheeps (large yellow chicks), Black Sheep, and Puffles (literally nothing more than tuft balls of dandelion fuzz). These pets can be stroked and fed, and will accompany you as you play the game.

Unusually, we do not appear to see much of the questing described in the initial intro videos. Despite talking with various character, not a single one referred to any of Hello Kitty’s friends being asleep, or requiring my character to seek out the keys mentioned to free them. 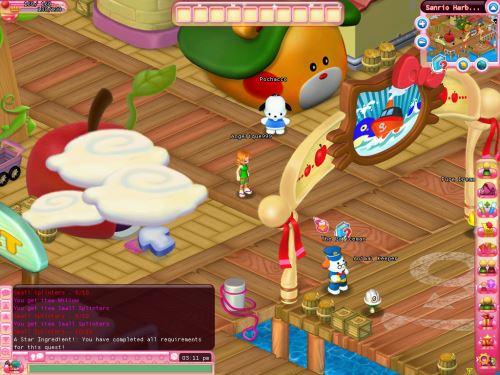 Overall, I would say Hello Kitty Online is a good game, and pretty fun to play. I had my doubts when I first sought it out for reviewing, given that the last time I had seen or interacted with anything related to Hello Kitty, I wasn’t even in the double digits in terms of age. However, nearly three hours of playing the game passed by without my notice, or any boredom. Hello Kitty Online has proved to be a game in which not only children, but also adults can find themselves having a good time. Anyone looking for a simple, entertaining game should check out Hello Kitty Online.