A Tale in the Desert Review

A Tale in the Desert (ATITD)was a pretty revolutionary MMORPG when it was first released over a decade ago. It has no combat, instead gameplay is focused on crafting and social actions. Players perform various tasks that are helpful to the community such as: exploring the land to find resources, processing flax to make into cloth, farming, cooking, making leather, and so forth. ATITD can be downloaded and played for free for 24 hours but after the time limit there is a monthly subscription fee of $11.95.

A Tale in the Desert Review
by Owen Shaw 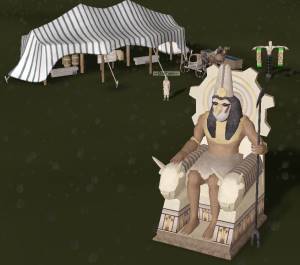 A Tale in the Desert is a combat-free MMO roleplaying game that releases you into the unending sandy landscape of ancient Egypt. Unlike many other games, you have a primary focus on crafting and trading, and it is deeply imperative to partake in social interactions to ultimately achieve the shared goals.

The game does not try or make a distinct effort to draw you in. Instead it presents you with what it has to offer and asks you to give it a try to slowly discover its purpose and appeal. You will seldom find immediate satisfaction in completing goals and instead work on long term achievements.

You wander around the desolate landscape of the Egyptian desert, gathering resources and creating items off of a grocery list of tasks. Most of the time you can’t even see the object you need to acquire, it is simply indicated with an icon in the top left corner when you have walked over it. Even when you find what you need there is no indication that you have accomplished anything. Of course collecting mud is not really accomplishing anything, but within the context of the game you should be congratulated or told with a simple, delightful chime when you have done something you are supposed to do. 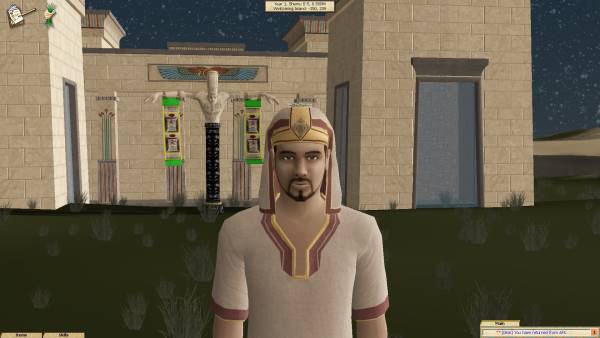 Your first task in the game is to become a citizen, which requires you to cross off tasks from a list that include collecting sand, drying grass into straw, and planting flax seeds. Not only does this not make sense in that you are doing things that do not seem to progress you towards the desired goal, but it is inherently something devoid of fun. I get the same feeling I get as when I’m doing my taxes – a mind numbing, monotonous, seemingly pedantic excursion into the darker side of boredom. Carry the one, collect the mud, carry the two, collect the grass and dry into straw, and so on and so ends my life.

You also spend your time exchanging these resources as tuition to learn new skills at Schools and Universities. For instance, you would chisel a few pieces of slate next to a river bed, acquiring enough pieces to learn the skill of Stone Blade Fabrication to then make stone plates that allow you to build other things, and so on and so forth, which should eventually lead you and the rest of the players to create a stable government and society capable of accomplishing the larger task.

It has the most bizarre controls I have ever come across. It’s as if the developer has never played a video game before in their life. You move your character by clicking with the mouse in the direction you wish to proceed, which is fine, but you unfortunately you need to continually click to move or else pick a destination far off in the distance and wait until you arrive. If you happen to try and move somewhere you can’t physically go, a large textbox fills the screen to explain why you cannot complete this action. That seems like a natural thing to do to point out restrictions, but it does it every single time you try and direct your character somewhere they can’t go. The textbox message includes instructions on how to hide these messages as if they already know it will be annoying and intrusive, but instead decided to leave it in and have you do the work yourself.

Despite a deep rooted dependency on player cooperation and interact, my experience was without many significant engagements that could have turned the tides of this experience and perhaps jolted me into appreciating the charm of the experimental premise. 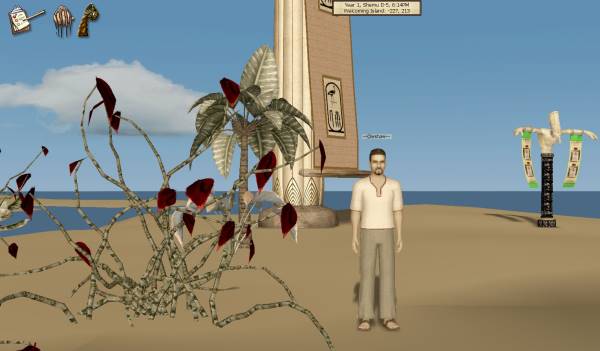 The world you explore feels quite empty, lacking both variety and beauty. You will walk across an endless desert, sparse patches of green grass, an oasis or two and rivers with which you cannot interact. It is minimalist to put it politely and the sound design follows suit. There are very few sounds at all, aside from the perpetual sound of the gently whistling wind and footsteps as you crush grains of sand beneath your feet.
The look of A Tale in the Desert comes from an era that was long ago rendered obsolete. Not only is it visually homely, but it is plagued with graphical issues such as magically disappearing and reappearing textures and models.

This is not a game focused on aesthetics and is somewhat inconsequential for the purpose, so it should not be entirely held against it.

I myself found this game to be neither interesting to play nor perceptively satisfying in any way. There is a reason games with violence and combat are so popular, and that’s because it provides some sort of instinctual excitement. People either play games for escapism, to feel powerful and have control, or for the artistic qualities – seeing life expressed through art. This game doesn’t really do any of these things and instead gives you a game where you are a regular person doing mundane tasks for dull rewards.

A Tale in the Desert is definitely not “a looker” by the standards of any beholder, but even setting that aside there we many moments where the models and graphics writhed in an erratic panic when you looked at the world from a particular perspective.

It has a great premise and a commendable approach to refresh a mostly saturated genre filled with fantasy violence and questing. Although it is a great idea in theory, the final product is far less compelling, with no discernible effort to create excitement or intrigue. It is more like a social experiment to observe human behavior in circumstances relying on player cooperation.

There is however an audience for such a niche game. Although it may be possessed by certain demons that I ca’’t overlook, it still has a core premise that is entirely unique and quite audacious. At the very least it can be praised for that.