The Elder Scrolls Online, aka ESO or TESO, is a big-budget MMO game set in the Elder Scrolls game universe. It was moderately successful during its initial launch date in 2014 for its PC and Mac versions. ESO has also been available on the PlayStation 4 and Xbox One since 2015.

Though at first ESO was a subscription MMORPG, these days you only need to buy the game to play it. No monthly subscription fee is required.

“The Elder Scrolls Online” tells an interesting story, not only through its gameplay, but also in the changes the title has undergone. When it was originally released, Elder Scrolls Online was a paid-membership MMORPG. Many fans felt that the investment per month was not worth the content they were playing. Recently, the creators of the game (Bethesda) made the decision to switch over to a no-membership model. This coincided with the console release, titled The “Elder Scrolls: Tamriel Unlimited.” It’s my great pleasure to let everyone know that ESO has never been better.

ESO is a stellar game. It boasts many deep and complex systems, which are also incredibly easy for newcomers. The controls are tight, the content is plentiful, and the experience is wonderful. The jump from the original release to the new “Tamriel Unlimited” version gave way to a substantial amount of retooling and upgrading. With this new version, players have the option to explore the world of Tamriel with almost unlimited bounds, disregarding player level. 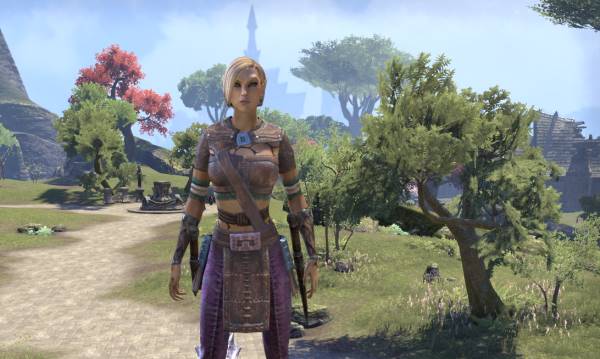 As far as the rest of the graphics and audio go, it is all functional and enjoyable. Changes in back round music indicate whether you’re currently engaged in battle, roaming an underground cavern, exploring an expansive field, and so forth. The score matches the atmosphere at almost every step of the way. Graphically, the environments are beautiful, but moreso beautiful in variety rather than graphical intensity. The game looks good, but you’ll be more impressed by what there is to see, rather than how it looks.

The game also handles very well. For those unfamiliar with The Elder Scrolls series, the combat is handled from a first-person perspective (but this can be changed to third-person if you prefer). You have two hands available to slot weapons or spells to, and a skill bar that displays your hotkeys for more specific combat moves. For example, my two-handed sword wielder was best played with just that; a two-handed sword. However, at any given moment, I could switch to a completely separate set of weapons and skills with a single button press. This would turn my tanky warrior into a rogue. The amount of customization on how you want to play and what skills you choose is immense.

At the outset, you are given the choice between three factions. While it appears to be a simple choice, this faction decision will decide how your first dozen hours will be spent. Across the overworld of Tamriel, there is three major land masses, all belonging to each of the three aforementioned factions. The faction you pick at the outset determines which of these land masses you will begin, and ultimately end your main quest line. Once I hit the max level cap and rolled over into “Veteran Rank,” I realized the magnitude of the content available.

The first continent (and the paired main questline) took me over 100 hours to complete. Between standard questing, I engaged in PvP, dungeons, raiding, and some social antics. The entire experience was a blast, and towards the end of the game (or so I thought), I was begging for more. Luckily, once you’ve reached the first Veteran Rank and completed the main quest line, the second continent becomes available to explore. Within it are hundreds of side quests and dungeons completely new to your character. After you manage to complete most of that continent, you will be able to explore the third continent. With questing alone, you’re looking at a very enjoyable 400-500 hours. However, there is much more to ESO than questing.

Besides choosing your faction (which also affects PvP, by the way), you select a standard race and class. Most of the expected MMO fare is here; orcs, elves, humans, ogres, and wizards. With a few notable exceptions such as the Khajjit, a human sized feline race, your options are pretty similar to past MMO experiences. From there, you select a class (which is affected by your race as well), all of which represent general RPG stereotypes. I chose a two-handed warrior, infused with dragon blood, making my character some sort of human-dragon monster. The character creation alone was entertaining enough.

I should note that the main quest line will always remain the same, regardless of the faction you choose. However, the previously mentioned continents are varied and beautiful to look at. From the vibrant forests of Daggerfall, down to the desolate dunes of Alik’r Desert, ESO does a great job never staying in one place too long. Side quests are full of story, are widely varied, and are generally a blast to experience. There’s also a few specialized side quests that can turn your character into a werewolf or vampire, both of which have entire skill trees to upgrade.

In conjuncture with unique skill trees for races, there are also unique skill trees for the “guilds” in the game. Not to be confused with the standard PvP guild, these are in-game groups of people dedicated to certain ways of life. There’s a Fighter’s Guild, a Mage’s Guild, etc, all of which have their own lengthy quest lines as well as diverse skill trees. In addition to the race/class/faction skill trees, once you hit the Veteran ranks, you unlock a whole new upgrade system, akin to the one in The Elder Scrolls: Skyrim.

The actual act of combat is rewarding as well. Weapons display statistics, and the player level and enemy levels are easy to view and understand. You will never find yourself being taken into a zone that is out of your level-range; unless you visit it yourself. Experience points are earned in a way that feels organic, and you grow as a player as your character does. Whether you’re using an ice-staff, or shooting fire out of your left hand with a dagger in your right, ESO’s combat is always spot-on.

Unfortunately, ESO struggles in one area; the audience it is trying to appeal to. Fans of the standard Elder Scrolls series might find the MMO aspects too intimidating, and vice versa. I felt that ESO did a great job balancing the two aspects, but those players looking for a standard Elder Scrolls RPG should look elsewhere. In turn, MMO players should also taper their expectations when logging on, as ESO is a very unique experience.

The story told through the main quest line is actually a bit dull. In fact, the best stories you will find in ESO’s world are tucked away in very unique side quests. Side quest story telling is imaginative and diverse, and these stories never overstay their welcome. You also craft a name for yourself in the social aspect, as each big accomplishment in questing earns you a title that you can display to the rest of the world.

The PvP in ESO is something to behold. In the center of Tamriel, the province of Cyrodill hosts the battlefield of some of the biggest MMO fights I have ever seen. PvP is very much a group affair, and going out into the giant expansive land without some proper gear and a horse is certainly a death wish. PvP plays out like a very long game of “territories.”

PvP campaigns are played out over 7, 30, and sometimes 90 days. In these individual campaigns, your faction (determined by your choice in the beginning) is fighting to maintain control of large structures across an expansive map. Simply traveling from one end of the arena to the other would take roughly 20 minutes, if I had to guess. Fill this arena with hundreds upon hundreds of players, all blasting giant spells and summoning creatures, and you can see the spectacle that awaits. PvP plays out like a completely different game however, and some fans of the game stick to purely PvE.

Lastly, we arrive at the question of the free-to-play model. The only major hiccup I had was obtaining a horse; which took me roughly 35 hours to obtain. The amount of gold that a simple horse costs is frankly outrageous, and since a mount greatly increases your move speed, it’s something you’ll want to get early on. I was definitely tempted to shell out the real cash for a mount, but I wanted to see just how well ESO worked as a completely free game. The most beautiful thing about this game is how well it handles the marketplace. Gold and crowns (paid-currency) are easily discernible, and there is no content locked away under paid currency. In fact, the economy of the game works great in general, so you often have an excess of gold. The decision to remove the paid membership was probably the best thing Bethesda did with ESO.

In conclusion, there’s a lot more I could say about The Elder Scrolls Online. I could tell you about the incredibly in-depth crafting system, the equally complex alchemy system, or even the cooking profession. However, these things are all best experienced when found organically. The Elder Scrolls series and Bethesda RPG’s in general have always been about the beauty of exploration. Revealing interesting story plots or surprising gameplay elements would almost feel like spoiling it. When all is said and done, The Elder Scrolls Online is well worth the purchase, and has the community and content to last years.

« A Tale in the Desert Review
Elsword Review »