Elsword, also known as Elsword Online, is a free to play MMORPG by KOG Studios. First released in South Korea in 2007, the North American English version was released in 2011. The newest expansion, called Season 2, was recently released so it’s time to take a second look at the game. Here is our review of Elsword in 2016.

The very moment you open up the game page, Elsword screams “Asian media.” From the anime-style intro video to the bright, cutesy design, I would have chalked this up to another JRPG if it wasn’t for the fact that KOG is a South Korean company. This is not to be offensive – in fact, the game is pretty fun. Compared to my first time playing this game three months ago, quite a bit has improved in the short amount of time, surprisingly enough. 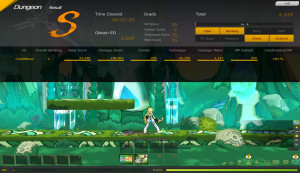 The graphics of Elsword – as stated beforehand – are very much like that of a cartoon. The colors are emphasized to be very bright and varied, to the point that I would even go so far as to call it “cheery.” While some of the 2.5D effects are a bit flat at certain angles, it gives it a sort of old school feel, in that it reminds me of some of the first three dimensional role playing games from my childhood. So you get a bit of nostalgic graphics mixed with new school color schemes. All in all, it’s a fairly beautiful effect.

The music in this game is a mix of serene and upbeat, depending on what is taking place during the game. With a strong focus of woodwind instruments, it can be easy to get lost in the fantasy feel of the background music.

Every character has their own unique names for their special attacks, and will call them out beforehand, adding more to the anime feel that was noted earlier. Along with this, the character will continuously cry out while striking out against their enemies, as one would expect in a game – there is no monotonous characters to be found.

However, the game has one flaw (or rather, glitch) that continuously occurs at random points throughout the game, and serves to annoy me to no end. Picture: You are happily enjoying the game, exploring the dungeons and slaughtering every monster that dares cross your path, when suddenly your character goes silent. No amount of button smashing, audio adjustment, or speaker checks will make them speak again, save for an occasional noise if you are lucky. This “silence glitch” as I have come to call it, forces the character’s vocal reactions to cease completely, while every other sound continues on without issue. Needless to say, this tends to throw off a player’s game mentally, and can be quite distracting.

Elsword is no stranger to the art of special effects. While this may seem odd to reference in a game review, I am not just referring to random explosions and the like, although this game holds a fair amount of them depending on the attack used by your character. Rather, Elsword boasts effects such as a “blackout” effect on the screen when a character uses special attacks, focusing solely on them and providing action kanji, much like that of a manga, or an old fashioned martial arts movie. They add a nice bit of excitement to the game. 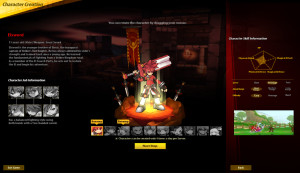 Characters for the game are selected from a group of ten unique pre-sets (nine single characters and one duo, whom you will see from the starting video). Each character has their own name, set of background information, skill statistics, attack range, speed, and a level of difficulty in regards to playability.

With each character, there are six jobs which – while not actually providing a career – change the attack range, speed, and level of difficulty. This allows variety, even when using (or re-using) the same characters.

Players can further customize their characters through real-world purchases of character motions, outfits, facial features, hair, and – most recently – pet companions. Equipment can also be purchased for each character, although no equipment will cause any notable changes to your character (beyond the obvious attack and defense benefits).

All in all, I would say that despite the fact that the characters are pre-set, the immense level of customization available to the players (even with the downside of requiring real-world currency to afford a majority) makes up for this fact. 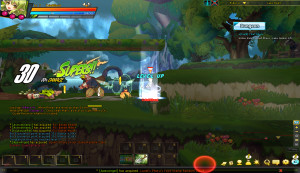 Elsword takes on the classic format of a keyboard-controlled side scroller game. Each character begins with two forms of basic attacks and skill attacks at their disposal, and can unlock more skill attacks as they complete quests and gain experience. The basic attacks can be used as many times as possible, pretty much as quickly as you can smash the button.

However, the skill attacks rely on the use of mana. Mana is automatically regenerated while characters are standing still. Considering the various enemies found throughout each area (and each dungeon), it’s important to keep track of this, lest you find your character suffering as a result. This is especially important during quests, as almost every quest (if not all of them) takes place in a set dungeon.

The rule of completing each dungeon is not as simple as making it to the end – rather, the name of the game is enemy slaughter. Every enemy found in the dungeon, big or small, has to be taken out before dungeon can be considered complete, and the character can move on.

Thankfully, there’s a good amount of variety when it comes to enemies and their attacks (as well as some spouted threats) so it’s pretty easy to keep the level of interest up while performing pretty much the same task over and over.

Overall, Elsword is a good game. Three months ago, I would have said the opposite, given how many problems (such as quickly growing boring) and glitches could be found in the game. However, it would seem KOG is now dedicated to improving their game as time goes on, which I would consider a big bonus given that the game is an MMORPG. Anyone who is a fan of magical, fantasy-based games, Asian animation styles, or just an old school style game that’s enjoyable to play, should check out this free game.