Dragon Pals is a side-scrolling browser MMORPG with a customizable dragon pet system. It is free to play and extremely easy to start – after a quick registration, it only takes a few seconds to load the game. I played it for three days and here is what I think of the game so far.

Character creation in Dragon Pals involves choosing your avatar’s gender and one of the three available classes: Warrior, Archer, and Mage. That’s it. There is no way of customizing your character. Later on, when you actually start playing, there are a lot of costumes you can buy, but at this time you can only choose one of the six options shown in the screenshot above.

The game starts off with a princess being menaced by some cat creatures (Lynxes) and their seven-headed boss, Beleth. It seems hopeless for the girl but after she prays to the gods to save her, Beleth says:

“Your prayers are wasted, and you are doomed! If I am wrong, then may your worthless god strike me down.”

This turns out to be too much provocation for the game gods to ignore as he is immediately struck down dead by something falling from the sky. This turns out to be the hero (the player) who just fell of a cliff and coincidentally landed on the boss. Due to these dramatic circumstances the player is hailed as the Child of Fate.

On the same screen there is a rather large egg which the hero grabs because eggs are delicious. It cracks open and a dragon comes out. That’s no problem, dragon meat is also yummy!

Just kidding. The dragon turns out to be a good companion who can help out in fights. This starts your adventure in Dragon Pals.

I do really like the graphics since they are cartoony without looking ridiculous. The environments are attractive, varied, well detailed and colorful. The character designs are also quite good since there are tons of costumes and items you can use to make your avatar look better.

The skill animations are over-the-top fun.

As to the user interface, as is the usual thing with browser MMORPGs, the screen is crowded with icons and buttons that each have a specific use. It looks very cluttered but once you have played you should be able to remember what each icon is for.

This is a screenshot of my archer character when I first started playing her.

Notice that she is not wearing any pants (or a skirt)! In fact, she seems to be wearing only a belt and some sort of loincloth. Not cool. 🙁

I really don’t like it when we have no choice about character designs showing too much skin. I am not a prude. A miniskirt would have been acceptable but no skirt, no pants is going a bit too far, IMO.

Thankfully, you can put on a costume and cover up your character. This is a screenshot of my character wearing a white ball gown.

I admit this is a personal pet peeve of mine. Most people won’t care about this aspect of the game.

Quests are straightforward and easy to do as they mostly involve killing mobs. Basically, it’s the usual “help me, hero! those big mean old demons took my stuff!” and you have to help them out. The hero even points out that:

“These people are so weak all their stuff always gets stolen by demons. Maybe the demons would be better land owners.”

I have to hand it to the game writers, they like to inject humor in the dialogue which I enjoy.

Once you agree to help people out, you go to the world map and enter an instanced map. 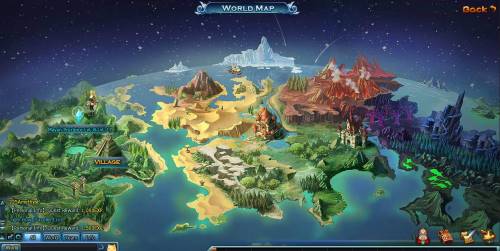 So combat happens not in the world map but in an instance. 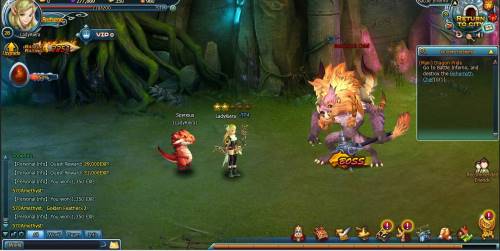 I was very shocked at first when I realized that combat is automated. I was like “oh which skill do I use?” when my avatar just started attacking by herself with no input from me.

It seems that to fight, all I needed to do was to click on that boss then we enter the combat screen and my char does all the work for me.

To be fair, you can go into the skill screen and choose which skills your character will use but I would have preferred to be able to input skill commands myself.

Despite my distaste for auto-combat, I did still have fun playing since I have come to look forward to seeing what my character will say next. She’s funny.

“I’m just here to chew bubble gum and try out my new weapon, and I’m all out of bubble gum.” – my archer character 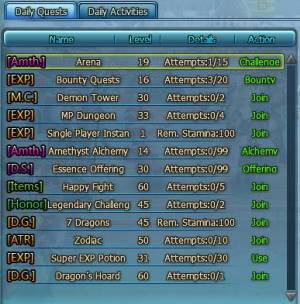 This is where I can tell you that with Dragon Pals, you will never get bored. There are so many daily events that you can socialize and compete with other players all day long.

Some daily events or quests/tasks are solo while others are for groups or for the entire server. I even saw one event that was cross server. A good thing about this is that, from what I could observe, there are plenty of players in Dragon Pals. You shouldn’t run out of people to play with any time soon.

The PvP arena I tried out is one where you can challenge different players to a fight but it seems that you don’t fight the others live. Instead, fights are with the other character’s AI so it wasn’t really very exciting at all.

In summary, I can say that I did enjoy playing Dragon Pals. There were some disappointments, chiefly the automated combat system, but the game has much to offer the casual player. I cannot recommend this game to those who are mainly into combat since Dragon Pals’ combat system leaves much to be desired.

Another thing that I can say is that I do absolutely love my hero to pieces! She is very funny. I leave you with this quote from her (see image below).

Most of the time, I played just to find out what funny thing she was going to say next. For those who are simply looking for a fun, free, casual MMORPG that you can play on your browser, Dragon Pals is good.